Whilst it is easy, and perhaps even a bit lazy, to think of our path as a simple linear progression forwards, in life paths are usually more complex. In art I like to imagine this complexity as a shifting circle, a bit like the Zen Buddhist ensō. In Zen Buddhism the ensō is a brushstroke or two making a circle. The symbol of Zen is a circle that doesn’t quite join up, although the viewer may see it as a whole. This shifting circle is nonetheless associated with strength and enlightenment. The action to create it is “a moment when the mind is free to let the body create.” (Wikipedia)

This series of looping circles is on the wall in my studio. I created these and other calligraphic works at a workshop hosted by New Zealand painter Max Gimblett at the Auckland Art Gallery. Max Gimblett is the most prominent New Zealand artist to embrace Zen Buddhism in his painting practice. I was interested in how Zen Buddhism could be integrated with my own art practice, having done a short course in Zen Buddhism at the University of Auckland 2006. In Zen Buddhism there is no permanent individual self and the transience of all things is emphasised. In my work I sometimes use shifting, unresolved forms and indistinct landscapes with this in mind.

For more on Zen Buddhism and art have a look at:

I like to think of the process of creating art as being a bit like those looping circles. Painting is not a simple linear regression from one point to another, more sophisticated point. Earlier themes and strands can sometimes be revisited, ready for further exploration and a push in a new direction. Here is a small picture I did at 17 years old, included in my 7th form art portfolio. 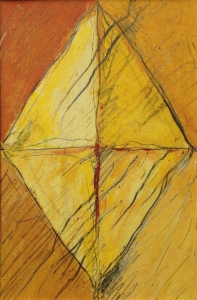 I used a kite/diamond form as a defining theme. After a year of exploring this form I did not feel the need to do anything more in this direction. But that form popped up in a sketch recently (see below), and I realised it is ok now to pick up that thread again, and to see what happens. 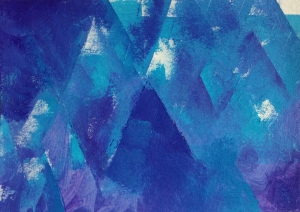 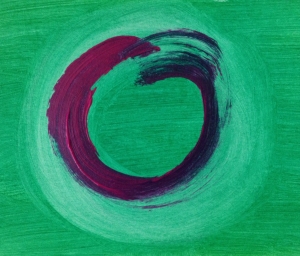 Yesterday I did colourful spring ensō to celebrate the end of winter and the beginning of spring here in the Southern Hemisphere. Blossoms have begun to appear everywhere as we hover on the cusp between Winter and Spring. If we had a New Zealand version of Hanami, the Japanese festival of flower viewing, then perhaps the native manuka and kanuka blossoms could substitute for cherry. 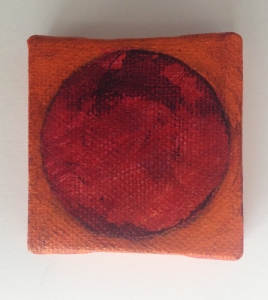 Over the years I’ve done quite a few tiny paintings and other small works. They are a really good way to test out ideas and very convenient for a traveller like myself.

They can be done on miniature stretched canvases, painting paper or simply offcuts of linen and canvas.